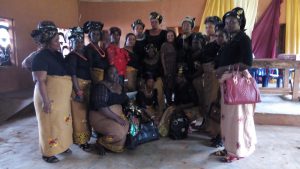 The Association of People Living with Sickle Cell Disorder has continued her sensitization campaign on sickle cell, as the Coordinator Aisha Edwards was on ground at Nibo Civic Centre on August 30, to interact with mothers gathered from all the Local Government Areas in Anambra State on the scourge of sickle cell disorder.

Speaking to Press after the program that had a large turnout of mothers from different LGAs, Aisha thanked the Osodieme Women Initiative for their towering efforts and contributions to the sickle cell sensitization campaign. She acknowledged the Leader Lady Odibeze Eunice For standing by the Association at all times, and for coming up with such idea of gathering mothers to listen to speeches that would benefit them.

The Leader of the Osodieme Women Initiative, Lady Eunice thanked Aisha for making time to grace the event. She encouraged her to continue her fight through the sickle cell campaign, and promised that her association shall always be by the side of the sickle cell association in all her strides.

In the same vein, Aisha Edward Whose second visit was at Ukpo appreciated the Federal Government for extending her free medical services to Nnamdi Azikiwe University Teaching hospital Ukpo, where the Association’s sickle cell clinic is situated. Aisha was present at Ukpo for the ongoing free medical services sponsored by the Federal Ministry of Health and seized the opportunity to appreciate the efforts of the CMD of the hospital who was represented by the Deputy CMAC Dr. Ugboaja Joseph,for their kind gestures and meekness that they have showered on the association ever since they came in contact with Each other.

The Association continues her sensitization campaign, as it gains strength at every step it makes across the state, spreading the message of genotype education. Prominent among the Medical Experts present was Prof. Dr Modebe the HOD Ukpo Annex Hospital NAUTH and Lady Adaora Ngozi Iloanusi Onyeyili The Head of Nursing Dept. NAUTH Nnewi Hospital Who gave an exclusive health management tips and Lecture to thousands of patients in attendants who were also Beneficiaries of the federal government health intervention program. This according to Aisha is a noble and humanitarian exercise worthy of commendation.