In what could be likened to a show of mixed feelings, Chibuike Okechukwu expressed his feelings of delight and gratitude as he received a sewing machine, weaving machine and a big power generating set as empowerment packages from her Excellency Chief Mrs Ebelechukwu Obiano, the wife of the Anambra State Governor. 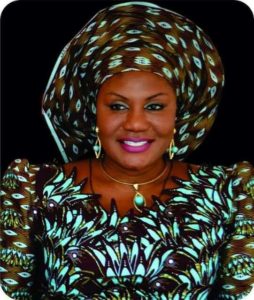 The package which was part of her Excellency’s initiative to aid the less privileged in the society through her organization CAFÉ, was greeted with great joy from members of the Association of Persons Living with Sickle Cell Disorder, as they all rallied round their colleague, who is also a sickle cell victim and a disabled.

The members took turns to appreciate the Wife of the Governor for such kindness and benevolence, they regarded her as a woman that has lived up to the virtues of Charity and compassion, and has always come to their aid as an association each time they called on her.

Okechukwu, who hails from Ukpo in Dunukofia LGA of the State, expressed his joy at the compassion of her excellency, stating that the package would go a long way in being utilised for the purpose it was given. He promised never to relent, and appreciated Osodieme for the kind gesture of believing in the abilities of his physical disability. He also urged his colleagues at APLSCD to never relent, as they shall also receive same favour as he did in due time.

Reacting to the good news, Aisha Edward, the coordinator of the Association appreciated her Excellency for her enormous heart of love towards her members, and for always being a mother to them whenever they needed one. “You have made me Proud as a woman, and for alleviating the Sufferings of my APLSCD, We Shall never forget you, and Posterity will be very Kind to you”. However, she beckoned on other Women, especially those in the wheels of politics and high places in the society to emulate the goodwill of her Excellency, and aid other members who are from other LGAs in the State, as such aid would always put smiles on their faces, keep them out of the streets and make them a better person.

Rev. Ven. Orji on behalf of St. Mary’s Anglican Church Ukpo, thanked APLSCD and her Excellency for the massive empowerment they have given to their children especially those living with sickle cell disorder.

However, some mothers of the sickle cell victims who were present during the monthly meeting at Ukpo where the empowerment was made known to the Association, Mrs Ogamba and Mrs Konwea from Dunukofia LGA and Delta State respectively, appreciated Osodieme for her milk heart and also urged her to extend the empowerment packages to the coordinator who also is a sickle cell victim. According to them, The Coordinator is always Rallying around to get support for her members to the extent that nobody even remembers she is a victim herself. This they said affects the association as they usually find it hard to cope each time she BREAKS DOWN.