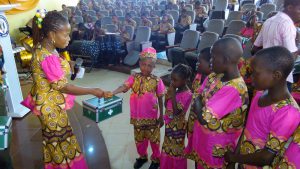 Today, September 5, 2016 the Association of People Living with Sickle Cell Disorder joined the rest of the world to celebrate World Charity Day, the celebration which holds every September 5, to reflect on the virtues of charity.

Speaking during an interview she granted the press at the Associations State office in Awka, Aisha Edward, the coordinator of the association said that the world charity day should be a day of sober reflection on the true meaning of charity, which according to her has been bastardized by most Nigerian politicians.

Aisha advised politicians to know that people vote them into office not because of how much they have given to charity but because of how well they can perform if elected into those positions.

She decried the gory situation where persons out of selfish interest lie with the act of charity, this she also blamed on the media for always taking advantage of goodwill to makeup up their headlines. She recounted a situation when a media platform published that a politician gave out bags of rice to over two thousand (2,000) widows, while in the actual sense the politician only gave out two hundred thousand (200, 000) to his female supporters who we were in no way widows as research uncovered.

She frowned at the scenarios were politicians hire media persons to accompany them to a motherless babies home or to visit the less privileged, this act of brazen insecurity demeans the virtues of charity and cannot reflect what the World Charity Day posits.

It is also absurd and an act of sheer wickedness that most persons under the guise of bogus NGOs and charitable organizations to defraud kind citizens who offer financial assistance without knowing the deceit. Aisha lamented that this is not only a case of fraud but also that of murder, as many persons who needed these financial aid for one thing or the order have died, while these monies were actually received by these NGOs and pocketed for personal use. She cited a clear case where The South Eastern Region alone floats at least 500 foundations or more owned by politicians for the sole purpose of campaign machinery during election period yet not even a single one of them remembered to mark or celebrate today of all days very important in their life and legislative responsibilities.

However, The Association of People Living with Sickle Cell Disorder commended well-meaning Nigerians who live up to the virtues of charity. People like Prince Engr. Arthur Eze is an exemplary figure worthy of emulation when it comes to charity, as he has over time proven beyond reasonable doubt what charity truly meanings, especially to people living with sickle cell disorder in Anambra State.

Prince Eze rose to the situation to build and donate a sickle cell clinic to the association, and he didn’t stop at that but went ahead to defray the cost of medical registration of all registered sickle cell persons in Anambra State, and provided them with the needed financial assistant that would defray their cost of medical bills for a year.

This is the kind of man, the association celebrates on this day of charity, and would wish that most persons would tow his path towards charity, as charity does not count how many lives were touched but the sincerity of purpose of the heart that extends the charity.

The World Charity Day, would not have come at a better time than now, a period when a new saint (Mother Theresa)was added to the catholic faith, and these saint is known for her charitable efforts in aiding the less privileged in her time.

APLSCD, celebrates with all those who have in one way or the other extended charitable hands to them and prays for abundance of blessings on them.