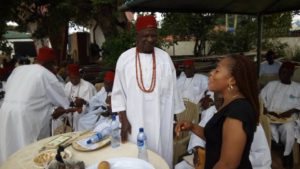 It was grand, glamorous and sumptuous at Ukpo in Dunukofia LGA of Anambra State on Friday September 2, as His Royal Highness, Igwe Robert Eze the traditional ruler of Ukpo celebrated his new yam festival with cabinet and titled chiefs of the prominent Ukpo town.

The festival was avenue for the King and his cabinet to appreciate God for his provisions and great harvest, and they did this in great style.

Speaking during her lecture at the event where she spoke on the need for Education, Prof. Stella Okunna, the first female professor of mass communication in Nigeria and Head of Department Mass Communication Nnamdi Aizikiwe University, Awka, advised on the need for education, stressing that it was not only just necessary for a child to be educated but was also the right of the child to get basic education, and parents could be sued for denying a child basic education. 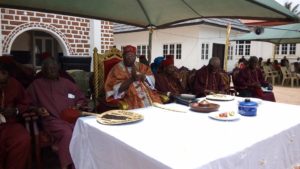 She added that education wasn’t as costly as presumed, as there are schools that offer basic education at affordable rates, and there was no excuse to not giving a child basic education. The former Chief of Staff Anambra state, concluded that the education of a child especially the girl child places her at par with the society, and if a child must flow with the current trends of the society, the child must be educated.

The enlightened traditional ruler who craves for excellence and enlightenment for his people Ushered in Aisha Edward, the Coordinator of the Association of People Living with Sickle Cell Disorder to speak to his subjects on the essence of knowing their genotype and the implications of their ignorance.

Aisha seized the opportunity to spread the wings of the Association’s sensitization campaign, as she hinted on the dangers of the ignorance of genotype, advising parents to help their children by insisting they know the genotypes of their partners, as that was the only way to end the proliferation of sickle cell disorder. 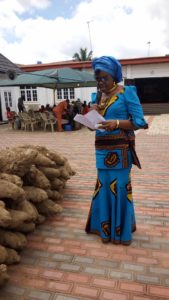 She further said that most of her members were at the receiving end of this ignorance to education, as they are been seen as persons bound to die soon and could be a waste of money training them. She advised parents to train their kids just as Professor Okunna had earlier hinted, she also beckoned on individuals to take education seriously and contribute their little quota in training of persons especially the less privileged ones. This contributions she said can be made through scholarships, and grants for the students.

Aisha recounted that she schooled under the scholarship scheme of Prince Engr. Arthur Eze at Ekulu primary school GRA Enugu and during that time she never knew who owned the TRIAX scholarship scheme, but somehow fate has brought her back to Ukpo and the town is reaping from a seed Arthur Eze sowed many years ago, thus, striking home her advice on people supporting persons less chanced in furthering their education.
Aisha appreciated the efforts of the king(Okofia vi) and his family who in numerous ways have provided succour to the members of association, and in a special way to their kin, Prince Engr. Arthur Eze who has been a pillar of support for the association. 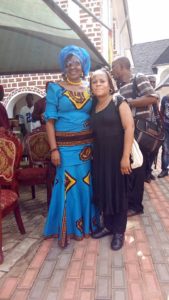