The former Anambra State SSG, Mr Oseloka Obaze has wiped the long flowing tears of persons living with sickle cell disorder from Anambra North, as he shocked the Sickle Cell Association with a grand donation aimed at augmenting the welfare of sicklers, especially those from that region of the state. 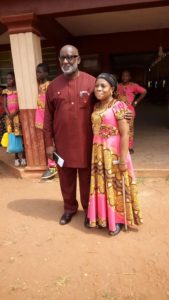 The Managing Director, Selonnes Consult, said he was moved to tears after learning the ordeal his kin pass through due to the mishap of their being victims of the sickle cell disorder, and it was not only kind and benevolent but also worthy of continuation that he extend his long arms of charity to the Association when they called on him.

Speaking to the Press after receiving the donation on behalf of the Association, Aisha Edward, the Coordinator of the Association was short of words of appreciation for the former Governorship aspirant who Celebrated with APLSCD during her 2015 Thanksgiving at Same Austica memorial college. Obaze whom the Association fondly calls the ENGLISH MAN, Surely Possesses a Rare benevolence, Prudent and Humility She likened to no other. She described him as a man who is highly principled, and one that understands the essence of charity, and the need to reach out to people that are less privileged.

She, however, stated that the donation would put bright smiles on the once sordid faces of Sickle cell victims from Anambra North, who for a long time have lived in neglect, as no help has come from their people who are well placed in the society. She narrated that members of the Association from the Anambra North region go through a lot, especially in the area of transporting themselves for meetings and other activities of the Association, and Obaze’s donation would strengthen the already Sagging Morale of those members. The donation, according to Aisha, would go a long way in augmenting the school fees, empowerment packages and Medical bills of persons from that region.

Aisha also hinted, that though the donation may not be enough to defray all the welfare costs of persons from that region, she was however happy that at last someone has shown concern to the plights of these victims of the disorder. She prayed other well placed Nigerians to emulate the selfless gesture of Mr Obaze and extend their hands of Charity to the Association, especially as they prepare for her annual Thanksgiving service and Get a together ceremony.

The Association continues her fair policy of ensuring that donations first reach the region where the benefactor originates from or the region he or she wishes it to reach before spreading across other members, as this would stir other benefactors to see the need of helping their own, as their donations shall be used in fending for those that are closer to them. However, each donation still circulates amongst all members regardless of what region they come from, except that first receivers are usually from the region where the donation originated from as published in aplscd.org the Association Website.

“APLSCD heartily appreciates Oseloka Obaze, and prays for him in all his endeavours. We shall book masses for him as we usually do for all of our benefactors Aisha concluded.