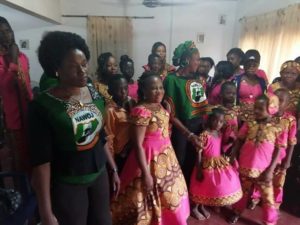 Speaking during the visit, the leader of the 6 person delegate and the Vice President of NAWOJ Mrs Chibota Edozie Expressed the Association desire to partner with the Sickle cell group to ensure that relevant authorities are made aware of the challenges persons living with the disorder face in this side of the country and chart ways to ensure that their cries for welfare and a sickle cell law to protect their rights are heeded to.

She promised to make a case for the sickle cell group as they pay courtesy visits to the wife of Governors in Nigeria who Should play a lead and active role in the Sensitization Campaign.

Aisha Edward, the Coordinator of the Sickle Cell group expressed joy and Satisfaction at the visit, and Promised that her Association will never relent in her struggles until the Sickle Cell Anemia Prevention law is passed to protect the rights of persons living with Sickle Cell Anemia Disorder anywhere in Nigeria. She beckoned on the Group of women journalists to add their voices in the call for a fair and just treatment for people living with sickle cell Anemia as she lamented that Journalists have not done enough in aiding the sensitization Campaign especially in investigative Journalism where many of us are Constantly Facing Untimely death as a result of Selfish, insensitive and Less Concerned Attitude of those in the Corridors of Power Courtesy of Partisan Politics, worst still in cohort with Some of Our Dearest Care Givers in the Presence of Our Helpless Parents.

She however, expressed optimism that the visit proves that their case is indeed a concern for the Women Journalists, and a hope that something better is not far away.