Human Rights Defenders, an NGO charged with ensuring the protection of basic Human Rights of citizens in the country has thrown their weight of support behind Association of Persons Living with Sickle Cell Disorder, with a strong promise to wade into the long overdue Sickle Cell law, and ensure it is passed in no time.

The Association made this promise during her 2day Seminar at NBA Conference Hall Onitsha during the week, where the emphasised on the gross violation of Human Rights by most persons who should ensure these rights are respected. The Chairperson of the the Human Rights Group Chief Dede Uzor while delivering his speech said it was highly unbecoming of certain persons in the society to continue the gross abuse of certain rights and privileges of the citizens placed under their care and protection. He charged the Police to see to it that Human Rights of citizens are not abused while performing their duties.

APLSCD Coordinator, Aisha Edward, who was one of the keynote speakers expressed her pain as to the mishandling of persons living with sickle cell disorder, how their rights to freedom of Association, and even right to life have been threatened by not only fraudulent NGOs, and health care givers, but the Government also. She emphasised the essence of these Sickle Cell Law as the last respite to salvaging the rights and welfare of those living with Sickle Cell Disorder. 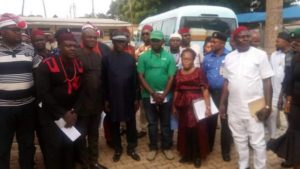 In his reactions, Hon Ugonna Ozuruigbo the Deputy Speaker of Imo State House of Assembly, who was one of the special guests at the event sympathized with the sickle cell group on the injustice they have to face everyday because of their disorder, he however, promised to go through the sickle cell Bill and ensure that it gets a hearing and an eventual passage into Law at the Imo State Assembly.