The agonies of persons living with Sickle Cell Disorder in Anambra State seems to be edging into extinction, as Committee set aside for the Sickle Cell Bill, has submitted its report to the state Assembly during its plenary on Thursday. 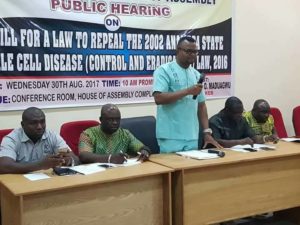 Receiving the report, the Speaker of the State Assembly, Rt. Hon. Rita Maduagwu applauded the committee for their painstaking efforts in putting up such a well detailed report on how to protect the welfare and rights of persons living with Sickle Cell Disorder.

Speaking to the Press shortly after the plenary, the sponsor of the bill, Hon. Charles Ezeani, expressed deep gratitude at the level of work put in by the committee to ensure that such bill, aimed at safeguarding the rights of persons living with sickle cell is enacted in due time. He was short of words to express his happiness that the bill after much setbacks reached the present stage. He promised that with his co-sponsors they shall not relent until the bill is enacted into Law.

The leader of Association of Persons Living with Sickle Cell Disorder, Aisha Edward, who was present during the plenary, was extremely emotional as the report was adopted by the house as a working document. In her words, members of the Association would leap for joy at the news, as they have patiently waited for that moment.

Aisha was full of praises for every member of the State Assembly, for not losing faith in their cause. She particularly thanked the speaker for rising up as not just a leader but a mother with milk of kindness. She appreciated her for enduring the complaints and listening to the cries of the Association throughout the long wait.

The Sickle Cell Advocate also thanked the sponsors of the bill for their relentless efforts in ensuring that the bill got to its present stage. She was not short of thanks for the Committee Chairman on health, Hon. Okafor, whom she appreciated for his gallant strides in steering the committee into a coordinated public hearing and series of meetings and consultations that gave birth to the report that was submitted.

The bill is expected to enter into the final reading and enactment stage within the next few days.