It was indeed a wonderful and unforgettable blissful experience for members of Association Of People Living with Sickle Cell Disorder as they were hosted to a sumptuous and grandeur Children’s Day Celebration by Chief. Dr. Paulinus Mbamalu the CEO and Director of Vonic Hotels Ekwulobia.

The  celebration was one of Chief Mbamalu’s Kind gestures of showing his love and affection to the association he has come to believe in their cause.

Speaking During the event as the guest Lecturer, Dr. Ifeoma Ajuba, a Haemotologist and Consultant with Nnamdi Azikiwe University Teaching Hospital emphasised on the routine care for sickle cell sufferers. She said that routine care was a very sure way for them to avoid having crisis, as it was better to avert crisis than to manage one.

According to her, the routine care includes taking foods with high nutrients and are capable of boosting the haemoglobin, these include fruits, vegetable, beans and intake of these would enhance the immune system and strengthen the blood vessels.

She further stressed on the need for sufferers to imbibe a tradition of taking water, as it appears to be their strongest asset in averting crisis. Water as she said should be taking at all times in the day and not just during meals. She said sufferers should take at least three litres of water daily, and should always watch the colour of their urine as a change in colour to lipton yellow signifies dehydration, and dehydration sickles their blood cells.

Dr. Ajuba advised that sufferers should drink like fishes and urinate like new born babies, as regular and consistent intake of water keeps the sufferers miles away from crisis.

She went ahead to reemphasise that there is no cure to the ailment, and sufferers shouldn’t be deceived when people make such assertions regarding a cure to sickle cell disorder, as it could only be managed and not cured.

Mrs. Theresa Mbamalu, who spoke on behalf of her husband, said it was pertinent that they support the association to make them feel among and not like the outcasts that the society make them feel.

She said that the Mbamalu family was moved by the plight of the sufferers and decided to host them to have fun and for once ease off their problems.

The coordinator of the Association, Aisha Edwards thanked the Mbamalu family for such overwhelming generosity stating that all they need was love and that they received more than they expected, as there were various packages to go round to all members and the invited guest, food was not a problem as all had their fill.

Mrs. Eunice who spoke on behalf of the Osodieme Women Initiative said the Association would always have their full support in all her dealings as their organization shall fight her cause to the last.

Aisha seized the opportunity to appreciate the Catholic and Anglican Bishops for their benevolence and magnanimity, she thanked Business Mogul and philanthropist Prince Engr. Arthur Eze for pledging to build a secretariat for the Association which will be dedicated in his honour. 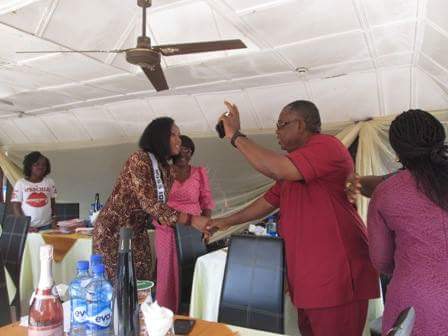 She further enjoined all and sundry to extend their hands of support to the Association just like Mr Peter Obi, Gov. Obiano and wife, Prince Arthur Eze, and Chief Mbamalu and family have done in recent times, as such support eases the unbearable pain of their crisis and makes them feel psychologically Stabilized

Speaking to the Press after the event, Chief Paulinus Mbamalu hinted that the event would be a yearly event, as the purpose was achieved, since the patients went home happy. He urged intending couples to check their Genotypes before they get married so as to avoid giving birth to victims of such incurable disorder.

Chief Mbamalu urged the government and other relevant bodies and individuals to extend their hands of love to the APLSCD members as all they needed was love.

Queen Amina, Miss Ideal Anambra 2015, who was present at the event and also spoke to the press, said she chose the sickle cell cause as her pet project not only because of her love for charity but because she has siblings who have the disorder, and so understand the intricacies of the disorder and the pain the sufferers go through. She promised to dedicate her time in fighting for the cause and promised not to relented until every intending couple understands the circumstances of the ignorance of not knowing their Geno-type.

High points of the event was the sharing of different souvenirs to over 300 members of APLSCD and Osodieme Women Initiative, courtesy of Chief Mbamalu.