Speaking during the phone in program, Aisha Edward, the coordinator of the sickle cell group,who was the guest on the program explained the need for an early media campaign for the UN Sickle Cell Day Program in June. She said that having started the media campaigns early, the association would be accorded enough time to create huge awareness for the program and garner enough support ahead of the program. 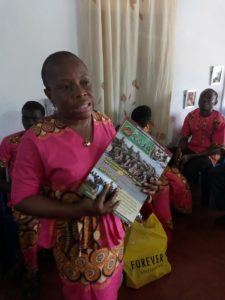 Aisha explained that this Year’s program would run into three days, as the Association plans to cut across several states and reach out to more people in this year’s edition of the celebration. She continued that activities lined for this year’s World Sickle Cell Day would amaze a lot of persons, and prays that the Anambra State Assembly gift the Association the long expected gift of the Sickle Cell Law during the World Sickle Cell Day Celebration.

The Association applauds the efforts of the Anambra Broadcasting Service for pitching in and supporting the media campaigns for the sickle cell day celebration through her station. Aisha also appreciated Governor Obiano for his support to the Broadcasting Station, building them into a world class brand.

The sickle Cell group Coordinator also appreciated the relentless efforts of Hon. Ikem Uzoezie one of the frontiers of the sickle cell bill at the state Assembly and a great benefactor of the Media campaigns for the World Sickle Cell Day Celebration. She described Uzozie as a man with benevolence and caring heart that reaches out to those around him.